Lean Years Ahead in the Middle East

What is going on in the Middle East involves a tangled mess of intersecting factors.  There is no single explanation for the unrest.

Factors include demographics, failing economic policies, oppressive regimes, radical religion, and food.  David Goldman (who writes in the Asia Times under the name of Spengler) first drew my attention to the food issue.  His latest writing on this, The Hunger to Come in Egypt makes very sobering reading indeed.

The problem of food is not only in Egypt - it will 'bite' elsewhere in the Middle East where there are not huge oil revenues.

Why is there a food issue?  To put it in a nutshell, the rise and rise of the Asian middle classe has put dramatic upward pressure on global food prices, especially during times of shortage.  Greater competition for the available grain resources, combined with growing meat consumption (animals eat the grain which otherwise might be destined for human consumption) as well as grain for ethanol exchange is causing widely global fluctuating grain prices.  Poor people simply cannot afford the price of grain when the prices spike.  I have collected here some statistics which provide something of the background to this.

First, we can note that the Middle East is in the peak of a population boom, with vast numbers of mouths to feed, especially among the cohort of young adults.  At the same time, in the Middle East, youth unemployment is the worst in the world: 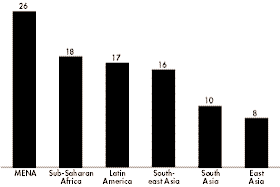 The next graphic shows how, over 50 years, North Africa and the Middle East have taken up a steadily increasing share of world wheat imports, until over the the past decade their share has hovered around one third of the global total.  The other big block of wheat importing nations — and the Middle East's main competitor for grain supplies – is South, East and South East Asia, where vast wealth has been accumulating during the Asian economic boom. 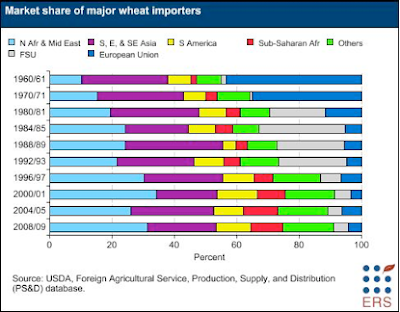 This next table shows the changes from 2004 to 2009 in the ranking of top wheat importers.  Middle Eastern countries went from being 2 of the top ten importers to 5 of the top ten.  Notice the top wheat importer in 2009 was Egypt!  Where does the money come from to pay for all that wheat?  Since January 2011, not from tourism revenues.
This next chart shows the price of wheat in recent years.  We are just now in another spike in prices. 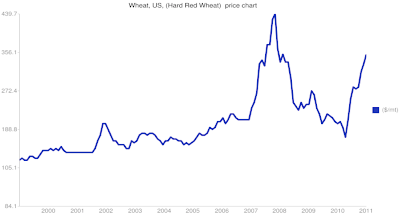 What happens if you live on under $2 a day, the global price of grain more than doubles, your national currency collapses, tourism revenues dry up and the local economy fails?  People starve.  A lot of people get badly hurt in the scramble for food and the inevitable recriminations as desperate people and political opportunists look for scapegoats.  You also could see a lot of starving people trying to make their way across the Mediterranean in leaky boats.
Goldman writes:

"Revolutions don't only kill their children. They kill a great many ordinary people. The 1921 famine after the Russian civil war killed an estimated five million people, and casualties on the same scale are quite possible in Egypt as well. Half of Egyptians live on $2 a day, and that $2 is about to collapse along with the national currency, and the result will be a catastrophe of, well, biblical proportions."

Posted by Mark Durie at 2:17 PM 2 comments: Links to this post

Response to Angus McLeay on the 'inherent requirements' test

It is disappointing to see name-calling and misrepresentation in McLeay's recent article "HOT POTATO': Religious Freedom, the Victorian Equal Opportunity Act and the Inherent Requirements Test".

Using emotionally charged terms such as 'strident', 'lobbies' and 'unChristian', he claims for himself the moral high ground while regarding it as a virtue that in doing so he will win favour in the eyes of some non-Christians.  But at the same time he misrepresents and vilifies fellow-Christians who disagree with him.  For example:

1. It is not true to claim that religious groups have opposed the removal of the right to discriminate on the grounds of disability.  I know of no Christian group who put such an argument forward.

2. It is a gross exaggeration to claim that "Those who opposed the recent changes claim that the true motivation for updating the Act was simply to harass Christians and enforce radical secularism".  Some may take that view, but to attribute it to all opponents of the Act is to promote a falsehood.  For example, I am someone who has vigorously opposed some specific feature of the new Act, and believe that it WILL encourage a climate in which secularism is enforced, do not and have not claimed that such an outcome is the 'true motivation' of the Act.  I would acknowledge that even many of those who would wish, for example, that Christian schools should not be able to make faith a criterion when employing teachers of secular subjects are "motivated by ideals of dignity and a fair go for all".  But I disagree with their conclusions in pursuing that agenda, and also with their assumptions about what constitutes a fair go.

3.  It is also misrepresentation to claim that "the campaign against changes to the old Act would rather us not be upfront about why staff in Christian organisations need a faith-based foundation for their roles". As a counter example, the argument against the "inherent requirements" test, which the Anglican Diocese put in 2009 to the former Labor government when it was revising the old Act, was that a "genuineness" test was better suited to the need for transparency.  In making this proposal, there was absolutely no desire that Christians not be upfront about the grounds for appointing people.  The genuineness test, if accepted, would have encouraged both transparency and accountability.

4. It is not true to claim that opposition to the inherent requirements test is based upon an 'unsupported and wild assumption' about how it would apply. For example, the Anglican Diocese's submission opposed this test based upon a legal opinion prepared by a senior barrister (who soon after was appointed to the supreme court of Victoria). This opinion considered in detail how the 'inherent requirements' test has been applied in other legal contexts.  The opinion pointed out multiple problems with this section of the act. One issue was ceding to a secular tribunal the right to decide which jobs within a religious organisation legitimately (in its view) require some sort of religious adherence or moral/ethical standard over and above the mere functional capacity to perform the job.

5. McLeay asserts that "if a maths teacher in a Christian school is required to share the faith of the school community, that would be stated upfront and there would be some reasonable justification."  Is this not a wildy naive assertion?  For, on the contrary, submissions by mainstream representative secular bodies to the Victorian parliament's review of the law in 2009 argued for an 'inherent requirements test' because they maintained it would mean quite the opposite, namely that the faith justification would NO LONGER be accepted for a position such as a maths teacher. And they backed the new law for this very reason, and oppose the recently proposed amendments also for this reason.  I deplore the fact that McLeay flies in the face of clear evidence, to embrace limitless optimism.  I also deplore the fact that, buoyed up by such naivety, and citing not even a shred of legal analysis to back his view, he vilifies those who disagree with him as 'unchristian', simply because he is aware of non-Christians who think the worst of them.

In a strange kind of fear-driven logic, McLeay's plight is that his heart leads his head.  His heart fears that non-Christian people will think ill of him, and especially of his gospel.  So his head appeals to this sceptical audience by denigrating other Christians, as if shouting out: 'Look at me, I am not a bad Christian like those other people.'

A better way is to stick to the issues and argue them clearly and simply.
Posted by Mark Durie at 2:16 PM No comments: Links to this post