For the first time this morning I had a good look at the past ten years of Melbourne's water supply here.
What I saw was disturbing. Over the past 10 years there have been two years where the water levels have dropped 20%, two years where they have dropped 10%, only a few years where the levels held steady, and just one year (2003) when they rose by more than a few percent. There has never been a year in the past ten when we have had a water level rise of 10%. On average we have been losing around 6% to 7% of our water every year for a decade. Another 2-3 years could see the end of Melbourne's usuable water, unless there is a long-term change to our rainfall trends.

I think I might go dig a well ...
Posted by Mark Durie at 7:49 AM No comments: Links to this post

As the contestants on the Australan 'Biggest Loser' TV show compete for the prize of being the last 'loser' (of weight) still standing, I've been watching. I found myself intrigued by the role of the coach. At first the participants have no idea what they are capable of. It is the coash who sees their potential from the start. The coach's job is to get more out of them than they ever dreamed they could have achieved.

Throughout the series, the transformation in the participants has been remarkable. From people with low self-esteem and a track record of failure, self-confident, 'can do' individuals are emerging boldly into the light of day. All of them are notching up landmark physical and psychological achievements along the way. Every contestant has done great things to be proud of.

In all this the contribution of the coach is crucial.

In the Christian life, the Holy Spirit, who is 'God alongside', is our coach. Seeing more potential in us than we can imagine, and knowing how to draw it out of us, the Holy Spirit challenges, chastizes, comforts, and consoles us to stretch out for our very best. This 'very best' is nothing other than Christ in us: the fulness of God's purposes being worked out in our lives.
Posted by Mark Durie at 1:56 PM No comments: Links to this post

Many Christians find the 'Easter Buns' in supermarkets an affront. They are traditionally known as Hot Cross Buns, to be baked and eaten on Good Friday as a breaking of the fast of Lent.

But these days they appear in local supermarkets by the first of January. And no more of this offensive 'Hot Cross' talk - these are 'Easter Buns', as in 'Easter Bun-ny'.

It was not so long ago that the Daily Telegraph reported that councils and schools throughout England were banning Hot Cross Buns, in an attempt not to offend Hindus, Muslims, Buddhists, or whoever else's wrath was to be feared. The Muslim Council of Britain wisely remarked that the decision was 'very, very bizarre', but a spokesman for the London borough of Tower Hamlets said 'We are moving away from the religious theme for Easter... We will probably be serving naan breads instead.'

Other creative souls invented a pagan origin for Hot Cross Buns - no doubt because then they could be happily eaten by all and sundry, and not banned as embarassing Christian food.

It is not pedantry which motivates me to write on these "Easter Buns". My point is that our community has become disconnected with its spiritual heritage. Good Friday and the crucifixion it celebrates have disappeared from the consciousness of the marketeers and chocolate bunny sellers.

But as for me, I will wait until Good Friday, and on that day remember what the cross stands for, as I munch on a Hot Cross Bun after our morning service.
Posted by Mark Durie at 11:03 PM 1 comment: Links to this post 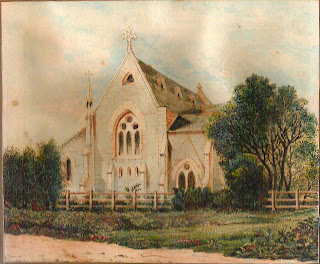 I thought I would begin my vicar's blog with a drawing of St Mary's. A member of the choir brought this to church last Sunday. This drawing was done in the early 1870's, within the first few years of the church being built. The artist, whose name was Ball, created this image as a memento of his son Isaac Ball's conversion through the ministry of the Revd HB Macartney, vicar of St Mary's. Isaac went on to become an ordained Anglican ministry, graduating from Moore College in Sydney in 1875.
Posted by Mark Durie at 8:40 AM 1 comment: Links to this post