Pentecost and the Gift of Other Languages

This is one of the more 'unusual' stories in the New Testament.  On the Day of Pentecost (Shavuot), the Holy Spirit comes upon 120 of Christ's disciples gathered in Jerusalem, and they spontaneously begin praising God.  What is remarkable is that all the people in the streets around hear this praise coming out in their own native languages - and these bystanders were from all over the Roman Empire, Jews come to celebrate Pentecost in Jerusalem, who spoke a multiplicity of languages. 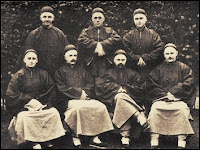 What is the meaning or significance of these 'other languages', also referred to as glossalalia and speaking in tongues?  Peter's sermon at the time says this fulfils a prophecy in Joel that your 'sons and daughters will prophesy' (Joel 2:28-32).  Presumably this just means that the words the disciples were uttering were given them by the Holy Spirit.  This was not prophecy as in 'foretelling the future' or prophesy as a word of rebuke to the nation or a call to justice.  The words God gave were pure praise.

Some have suggested these 'other languages' were a kind of missionary gift: a marvellous short cut to language proficiency.  C.T. Stud was an English cricketer who played at the 1882 test match with Australia which gave rise to the 'Ashes'. Studd became a missionary to China as one of the 'Cambridge Seven' (see photo). These young men all went out as missionaries after studying at Cambridge.  Studd prayed for a supernatural gift of being able to speak Mandarin Chinese, on the model of Acts 2, but ended up having to follow the usual laborious route of language study!

No-one takes this interpretation seriously today.  There is no suggestion in the  New Testament that people were given additional language skills, e.g that when Paul speaks of speaking in other languages, what he meant was that he had  an additional language to use in his preaching.  In fact there is no evidence even on Pentecost day that the disciples understood what they were saying – the miracle was reported to be in the ears of the listeners, who recognized their own languages come from the disciples' mouths.

Another explanation is that the languages were a kind of mending of Babel: instead of speech being confused after Babel into a multiplicity of mutually incomprehensible languages, God was removing language barriers.  This is a repair of the effects of sin, a kind of eschatalogical healing of the world.  However the focus in Acts 2 is not  on people communicating with each other. Rather the disciples are crying out praise TO GOD – who would understand them anyway.  The others who just happened to be  listening in were – completely unexpectedly – able to understand what they were saying in their own native languages.

Another explanation of the languages links them to a Jewish belief that at the giving of the law on Mt Sinai (celebrated at Pentecost), God's voice was heard in 70 languages.  This was believed to be the total number of the world's languages (actually there are thousands). If God spoke on Mt Sinai in multiple languages all at once - because the law was given for all the nations – then it would be no surprise when the Spirit came on the Day of Pentecost of Luke 2, that the Spirit's voice was also heard in all known languages.

The interpretation I prefer is that the 'other languages' represent a renewal of creation.  The truest and ultimate purpose of the gift of speech is to praise God.  Sadly human beings use this gift for much baser purposes, such as slander, cursing and telling lies. However Psalm 2 states that God ordains praise from the mouths of infants and babies (Psalm 8:2).  In the book of Revelation, the vision of the heavenly city has God's people speaking –   in praise and worship to God.  The gift of other languages on Pentecost was an in-breaking of this eschatalogical purpose for human language.  It was God 'ordaining praise' and renewing the purpose of speech.

In both the New Testament and contemporary experience, the phenomenon of 'other languages' is associated with two functions.  One is spontaneous praise, rather like the accounts of Acts (Chapters 2,  10 and 19).  The other is prayer, which is more in focus in Paul's writings.  Such prayer is also a manifestation of the Spirit's voice, as God himself prays through us (Romans 8:26).

Both praise and prayer are God-directed speech acts, and are also described in the Bible as God-breathed.  By this line of thinking, the 'other languages' of the New Testament represent an in-breaking of God's future, through the renewal of language as an anticipation of God's future renewal of all creation.  This manifestation is an example of what the writer to the Hebrews calls a foretaste of heaven and the powers of the age to come (Hebrews 6:4-5).

For more on this subject, and  last Sunday's sermon on the pentecostal manifestation of 'other languages', see the audio recording at Tongues of Fire.
Posted by Mark Durie at 9:52 PM No comments: Links to this post